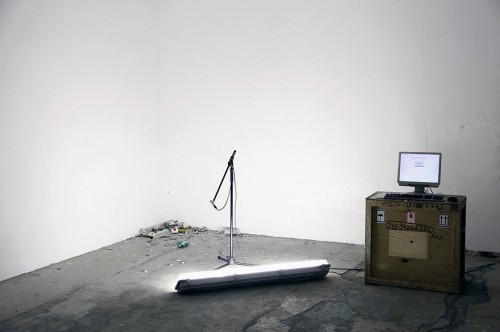 Modern society loves the spectacle. In constant search of sensational imagery, dionysian feasts are celebrated, adulating the measurable and buyable commodities tapdancing around us. According to french post-structuralist philosopher Jean Baudrillard daily life as a whole has become a system of signs: cars imply ”fahrvergnuegen“, shower gel promises sexual attraction, collectibles are tantamount to savoir vivre. Objects function as machines désirantes constantly producing a flow of desire and at the same time promising total gratification in every aspect. Annoyingly this system does hardly provide any escape route – in fact since the decline of most of the alter- natives to the capitalistic system it has been hyping up itself as the last resort, albeit rather committed to self-preservation than social justice. Baudrillard of course refers to swiss linguist Ferdinand de Saussure, according to whom language is made up of signs and every sign has two sides (like a coin or a sheet of paper, both sides of which are inseparable): the signifier, the ”shape“ of a word, its phonic component and the signified, the ideational component, the concept or object that appears in our minds when we hear or read the signifier. The relation between the signifier and the signified is ”arbitrary“, i.e. there is no direct connection between the shape and the concept, or – transferred to the aforesaid – between the object and the coherent desire.

The work To Leave Much To Be Desired (Semiology Of Destruction) tries to fulfill this gap and find this very thin tie by worming certain secret sounds out of objects themselves that are intrinsically connected to their materiality. Unfortunately objects will be deprived of their functional existence through this process. What will be left instead is their last yelp of suprise.